Families enthuse over joints and genes

More than 800 people joined scientists, PhD students and doctors from The University of Manchester, Central Manchester University Hospitals and Salford Royal NHS Foundation Trust at the Museum of Science and Industry’s Platform for Investigation, to explore the world of joints and genes through arthritis research.

Organised by the National Institute for Health Research (NIHR) Manchester Musculoskeletal Biomedical Research Unit (BRU), the day showcased how scientists and doctors in Manchester work together to assess and improve response to treatment of arthritis with the goal of treating arthritis: right first time. 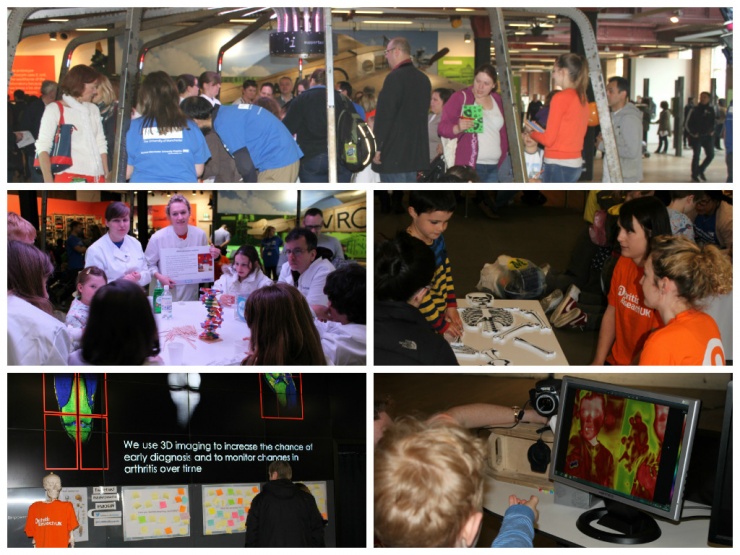 Visitors got stuck into hands-on workshops where they could extract DNA from their saliva, make genetic bracelets and race to see who could pair up chromosomes or build a skeleton in the fastest time.

The day also included hands on testing of different types of technology used in arthritis research. People were intrigued to see how ultrasound technology is used to look at joints and is a helpful tool in clinic to detect inflammation. The thermal imaging scanner was also very popular, with people posting heat map photos of their faces to twitter throughout the day.

Whilst younger children were engrossed in different hands-on activities, there was also the opportunity for teenagers and adults to talk to our researchers about on-going clinical studies, the development of new treatments and diagnostics for arthritis and how they can get more involved in research.

Many people did not realise that arthritis also affects children and younger people. Visitors were able to help researchers at The University of Manchester, by testing out a new ipad app they have developed that gives patients a more effective and interactive way to measure and report their pain.

The event was a great success, with visitors leaving positive comments and messages on the post-it note wall.