He is starting to be independent, just like any other 12-year-old child. He is full of energy and genuinely enjoys life now.

James was diagnosed with severe atopic eczema shortly after he was born. Despite various treatments, James experienced many severe flare-ups and struggled to lead a normal life for a child.

In 2016, he went onto the dupilumab clinical trial at the Children’s Clinical Research Facility (CCRF)* at Central Manchester University Hospitals NHS Foundation Trust. Now 12-years-old, James is on an extension study of the drug, and the impact has been significant.

Below, his mum Kelly, from Greater Manchester, explains James’ story: 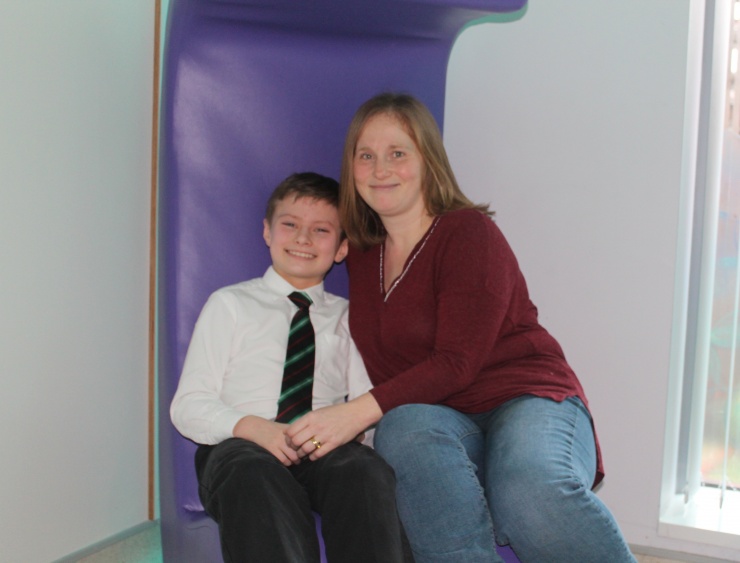 James with his Mum Kelly

James was first diagnosed with severe atopic eczema when he was just two weeks old. He tried many different treatments and was in and out of hospital with severe flare-ups. Some of the treatments worked for a time, but we were never able to keep it at bay for long.

It had a serious impact on James. Growing up, he didn’t have a good quality of life at all and he became quite isolated. When his eczema was at its worst, he found it difficult to walk or play outside with his friends. He struggled to eat and sleep due to being constantly itchy. Often it was only his sister Olivia who was able to make him smile.

Sometimes he was in so much pain he couldn’t even cope with clothes brushing against his skin; due to this he wore special close fitting tubifast garments. He would bite his arms in frustration and say it was like a thousand insects crawling all over him.

He couldn’t concentrate at school. The teachers were great at trying to keep him focused and distracting him to prevent him tearing at his skin. He often couldn’t go out and play with his friends at playtime due to the pain and discomfort of the flares. This was difficult to see and it meant he had to stay inside playing on the computer or doing activities with a member of staff. Even simple things like a family trip to the park could be extremely difficult.

James’ treatments always seemed to give us false hope. We would think it was working, but then it would all come crashing down and he would be back to square one. One day when James was six a really helpful paediatric community nurse said to me – “the current treatment plan isn’t working, is it?” A few days later James had a bad allergic reaction, and she referred James to Dr Peter Arkwright in the Allergy and Immunology department at Royal Manchester Children’s Hospital. He took the time to examine James, ask him how he was feeling and discussed treatment options with us and asked if we had any questions. There wasn’t an instant cure, but from that point on I felt we had finally had the help and support needed.

Dr Arkwright called us about the first dupilumab clinical trial last year and asked whether we would like James to take part. He explained the purpose of it clearly and sent some information via email to help us make a decision. I was already sure the answer would be yes as we had tried so many other treatment options, which had limited improvement. After discussing it with my husband, we both spoke to James regarding the clinical trial. I then emailed Dr Arkwright to let him know we were happy for James to take part.

Once it had been established James met the study criteria, a skin assessment, photos and blood tests were taken. James then attended the CCRF hospital weekly for a dupilumab injection during the first trial. I have now been trained to administer the weekly injection, so James attends hospital just once a month.

Within two weeks of starting the treatment there were noticeable improvements, and after four weeks the results were dramatic. James is happier, he sleeps and goes swimming with his friends, which would have been impossible before.

I don’t need to be around as much now as he is starting to be independent, just like any other 12-year-old child. He is full of energy and genuinely enjoys life now.

The Children’s Clinical Research Facility is a fantastic place for children. All of the staff are amazing! Emma, the play specialist, is so funny and engaging with all the children. There are cupboards full of toys for them to play with. They are always made to feel at home.

When we were asked about taking part in clinical research, we were at a stage where it felt like it was worth it. From our point of view, if there is a chance that getting involved in research might have a positive impact and lead to better health for you or your child then why not give it a go?

*James’ trial took place at the National Institute for Health Research / Wellcome Trust Children’s Clinical Research Facility at Royal Manchester Children’s Hospital, which is part of Central Manchester University Hospitals NHS Foundation Trust. The CCRF is focused on delivering experimental medicine research in a range of complex specialities, including immunology. James was able to take part in the study alongside on-going treatment and attended initially for weekly injections.