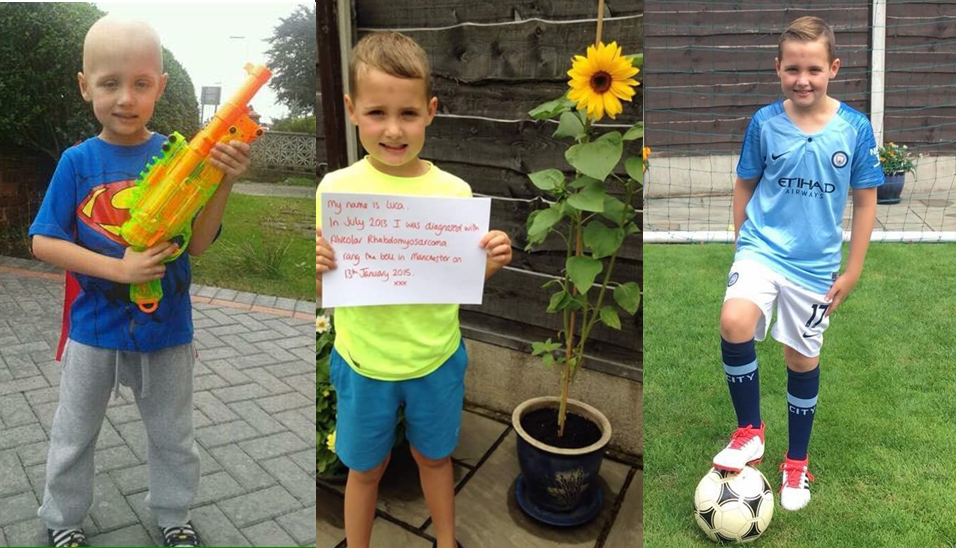 On a warm summer afternoon in 2013, Luca from Clifton in Salford was playing out in the garden with his cousin when his grandma noticed a lump on his shoulder. This was the start of a long journey for both Luca and his family, as told by his mum Jane below.

My mum called me outside to the garden, where Luca was playing in the water sprinkler with his cousin. She had noticed a lump on Luca’s shoulder blade. As he was only four years old at the time and the lump seemed to have come from nowhere, we were a bit concerned and decided to get it checked out.

We went to our local A&E where Luca had a series of tests including x-rays and bloods, but at first doctors couldn’t pinpoint a diagnosis. We were called back for an ultrasound and then referred to the Royal Manchester Children’s Hospital for further investigation, including bone scans and an MRI.

Following these tests we were given the devastating news that we had been dreading. Luca was diagnosed with stage 4, Alveolar Rhabdomyosarcoma, an aggressive form of cancer that develops from bone muscle cells.

When my husband Chris and I heard the word cancer, our world was turned upside down. Luca was so young; he was our only son and was such a beautiful, energetic and happy little boy.

Straight away we had the support of a Macmillan nurse and multi-disciplinary team, who talked us through the diagnosis in an open and honest way. Our consultant recommended a treatment schedule for Luca, including nine rounds of chemotherapy and radiotherapy to help shrink the tumour and hopefully surgery to remove all the cancerous tissue.

It was when we were discussing treatment options that we met Emma, one of the clinical research nurses on the ward who worked alongside researcher Professor Bernadette Brennan. They mentioned a research study that Luca might be eligible for, which was investigating an additional treatment for his form of cancer.

Our first thought was, yes, whatever we could do to help Luca and others. When you’re faced with something like cancer, you’re willing to try anything that might have even the smallest chances of helping.

With this in mind, we wanted to know more and had lots of questions. Emma explained everything clearly using language we could understand. This helped make sure we had all the information we needed and after talking it through, we decided to put Luca forward to be screened for the trial.

Once Luca was accepted on to the trial, we started having regular study visits which included being randomised on to the study drug and having additional scans. This meant we had to come to the hospital more often, but it helped us develop a strong relationship with our care team. We knew they were always on the end of the phone if we had a question, and Luca was always greeted by a friendly face on the ward.

With Luca only being four years old at his diagnosis, a hospital can be a scary place, but Emma made the experience a lot more enjoyable. We were kept up to date with his progress on the study and treatment.

Luca fought a long, hard battle, but thankfully overtime his tumour shrank and then was successfully removed with surgery. As part of the study Luca then received an additional years’ worth of maintenance chemotherapy, which is where a small dose is given every three weeks. This is so researchers could investigate whether the additional treatment would reduce the risk of cancer returning.

In the next few weeks, Luca will turn 10 and we’re so pleased to see how far he has come. He’s excelling at school and loves football and cricket. As he was so young, he doesn’t remember a lot about his time at hospital, but is starting to ask more about his cancer journey.

We honestly couldn’t have gone through those darker days without the research team. They explained everything, gave advice and counselled us on regular visits to the hospital.

I’d definitely encourage people to find out more about research studies, if it’s an option for them. I was amazed at the treatment available for Luca’s cancer; none of this would have been available without research.

To know that your involvement could help future generations is such a huge motivator.