The sadness of having three miscarriages has now turned to joy for Penny and her partner with the safe arrival of their daughter Layla, after taking part in the ALIFE2 clinical trial at Saint Mary’s Hospital.  Penny shares her experience of being part of this research study.

We had decided to try for a baby and were delighted when we quickly got pregnant.  Sadly, we lost the baby at around seven weeks and the same happened with my two following pregnancies.  I was anxious and worried that we’d never be able to have a family.  It was also very upsetting when friends were having babies but things weren’t going right for us.

Saint Mary’s was my local hospital and I was referred to the recurrent miscarriage team to see if anything could be done.  Clare, one of the clinical research nurses, got in touch to say my blood tests showed I had a condition called inherited thrombophilia, a blood clotting problem.  Some women whose blood tends to clot more than normal have an increased risk of miscarriage.

Clare also explained that I was eligible to take part in the ALIFE2 clinical trial, led by Dr Lamiya Mohiyiddeen who heads the recurrent miscarriage service at Saint Mary’s  This would involve giving myself daily injections of anti-coagulant (blood thinning medication) while I was pregnant.  The researchers wanted to find out if this would increase the chance of having a baby for women in my situation.

It was great to know there was some hope, and a year later when we found out I was pregnant I rang to ask if it was still possible to go on the trial.  I wasn’t scared about the injections or worried about taking part.  I was determined to do anything possible to have a healthy baby.

I was accepted on the trial and was part of the group randomly selected to have injections of a blood thinning drug called low molecular weight heparin.  Other women were given routine care without heparin, to see if the drug made any difference.

Clinical research nurse Alex talked us through the details of the study and what was involved and she looked after me throughout my pregnancy.  I got used to injecting myself daily, right up until I was 36 weeks’ pregnant.

It was easy to contact Alex for a chat if I had any questions or worries about how my pregnancy was progressing, which was very reassuring.  We moved to Leigh in Lancashire during this time and I saw several different midwives for my routine antenatal care, so it was great to have Alex around who knew my history.

We were absolutely overjoyed when Layla was born in September 2017.  She’s such a happy, healthy baby and although we had a few ups and downs in the early days, she’s thriving and full of energy. 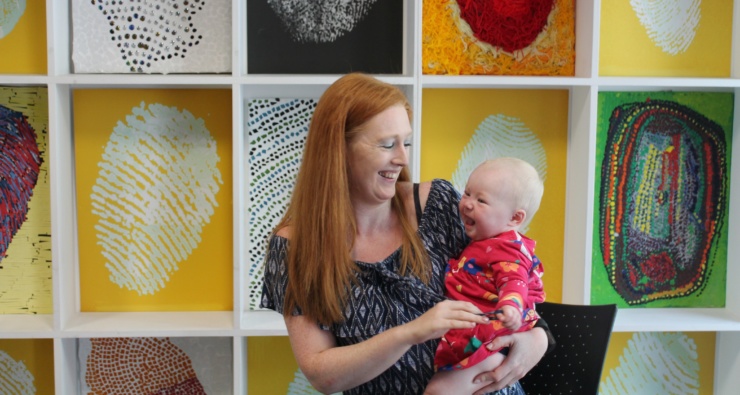 We’re so grateful to the research team for offering us the opportunity to get involved in the ALIFE2 study, which has transformed our lives.  The study is continuing, and I wouldn’t hesitate to recommend it to other women in my position.  We had a really positive experience and wonderful care at Saint Mary’s.

It’s only by doing research that the medical staff can find out whether new treatments work, and I’m really proud to have played a part in potentially helping other women to become mums.

For more information about ALIFE2, which runs until 2019, please contact Alex Pinzar (Gynaecology Clinical Research Nurse) on 0161 701 4699 or Alexandra.Pinzar@mft.nhs.uk