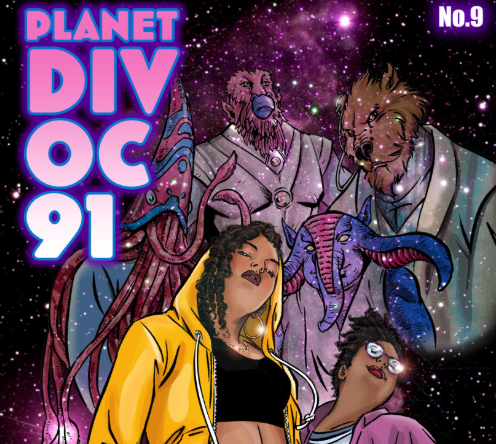 International COVID-19-inspired webcomic gets the attention of leading scientists and policy makers, who are now involving young people in their work

The final chapter of the nine-part webcomic, ‘Planet Divoc-91’ – featuring articles and art by young adults in India, South Africa and the UK – was published this week.

Back in March 2020, an impressive roster of comic book creators began collaborating to create Planet Divoc-91. Funded by some of the UK’s most prestigious scientific organisations, the ambitious webcomic is a metaphorical sci-fi and reflects on the experience of young people during the COVID-19 pandemic.

The project was kick started via NIHR Manchester Biomedical Research Centre (BRC) seed funding, which continues to provide support. An additional grant from Wellcome Trust enabled the project to expand into India and South Africa.

All nine installments can be found on the Planet Divoc-91 website, where a 10 point manifesto has also recently been published.

Impact of the project

More than 45 young people (16-25) from South Africa, India and the UK contributed to the project.

The young editorial team includes members of Voice Up, a group for 11 to 24-year-olds living in Greater Manchester to have their say in health research, and which is funded by NIHR Manchester Clinical Research Facility (CRF). The project also attracted other young people who had never been involved in research before.

They team has interviewed and shared their views with a range of experts, from scientists to historians, journalists to anthropologists, and from that material created articles, art and videos in reaction to the interviews.

“I was delighted to have the opportunity to talk with some of the young adults involved in the project and was so impressed by their questions and comments. I thoroughly enjoyed our conversation and seeing and understanding how young adults tackle the issues of a fictional pandemic can help scientists, doctors and governments around the world better understand how to respond to the very real coronavirus pandemic.”

The team went on to speak with more than 40 experts, including Prof K. VijayRaghavan, Principal Scientific Adviser to the Government of India and renowned psychiatrist Dr John Parker, of the Lentegeur Psychiatric Hospital, South Africa. More than half the young people are also taking part in a mentoring scheme, which matches them with creatives and scientists who can help them in their career.

Eventually, their journey led to them to presenting to Independent Sage, a group of scientists, unaffiliated to the Government, that aims to provide advice to the UK Government regarding the COVID-19 pandemic.

This includes 17-year-old Alma, from Manchester, who spoke in front of Independent Sage – which you can watch via this video clip.

The young people involved in the Planet Divoc-91 project have also been contributing to the AMS working groups and expert meetings, sharing their views with The Lancet briefing on adolescent wellbeing and climate change and even ending up on national breakfast TV in South Africa, The Expresso Show.

They are continuing to build bridges with researchers and policy makers in South Africa, UK and India.

“Through this project young people’s voices have been directly heard by senior scientists and policy makers. The collaborative effort means that everyone has learned from each other and this has helped to bridge gaps between research communities and wider audiences.

The creative outputs from this project have brought complex research topics into an accessible and engaging format.

More about the comic

In the series, our doomed blue dot stands on the brink of destruction with a huge asteroid hurtling towards it. Our only chance of survival is on Planet Divoc-91, a giant ‘safe house’, full of Galaxian refugee waifs and strays. But that too is now threatened with a mysterious virus. Alone and terrified, our protagonist Sanda Oung a 23-year-old girl and Champo, her 19-year-old, non-binary sibling, are now far, far away from home. Stuck between a rock and hard place, they don’t know it yet, but they are about to embark on a journey towards their true destiny.

Thrust into a testing alien landscape, which challenges them both physically and mentally, they battle hardship and isolation, as well as self-doubt and fear. As they attempt to integrate with locals and learn to survive, they also begin to ask bigger questions. Why are they really here? What lengths do they need to go to survive and even thrive?

Discovering a secret hospital overwhelmed with sick alien babies, they must draw on their inner resources as well as work with others to find out what’s spreading this deadly illness – and what they can do to help stop it. Sanda transforms from a frightened conspiracy theorist into a confident young woman, eventually leading them to safety. That is until the world is turned upside down again…

Quotes from a cross-section of people involved in the project

This comic project started as a small idea, but as the collective of young people, artists, scientists and engagement practitioners grew, the power of everyone’s enthusiasm turned this project into something that has given us all hope and comradery during some pretty bleak moments.

“As we publish the final chapter as the title states this is ‘The Place Where We Stop The Story’, but the work continues and lifelong bonds and collaborations have been formed.”

Professor Dame Anne Johnson, President of the Academy of Medical Sciences said: “The young adults working on this comic have opened my eyes to how tough the last year has been for them. Hearing from them in their own words was really impactful for me personally.

The voices of young adults have been severely lacking from the conversations about the wider effects of COVID-19. This group have worked so hard to add to that narrative, explaining how they are part of a generation that have missed out on so much, including all the important social interactions that we all take for granted.

“My fellow researchers and doctors who have heard them speak have been equally inspired by their eloquence and wisdom. They have presented the voice of their generation so effectively and demonstrated how important it is to include the experiences and ideas of young adults in current and future planning as we all learn to live with COVID-19 in our lives.”

Phelisa Sikwata, young editorial team, South Africa, said: “It goes without saying that education renders in many forms. Planet Divoc-91 is evident to that, that having clear intentions and holding space for innovation – truly does share information in the most humane ways – and yes, I meant ‘humane’. Coming from three continents, we traveled in collaboration towards this one offering and for me this has been the most humanely informative journey this far (I’m hopeful).”