International Women’s Day takes place on Friday 8 March. To mark the occasion, Polish-born Clinical Trials Manager Monika Cien speaks about her NHS journey from Band 2 to Band 7 – and how boxing helps her deal with her insecurities. 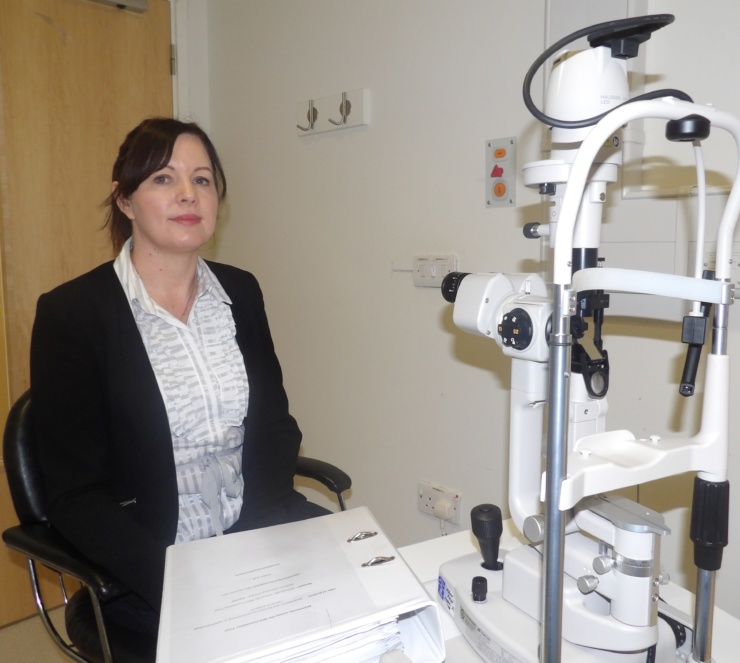 Monika Cien didn’t speak a word of English when she first moved to England from Poland in 2005.

In fact, she was let go from her first job – a cleaner with a major supermarket chain – after just three days because her employers couldn’t communicate with her. “I had no idea what they wanted me to do,” says Monika, then aged 28.

Fourteen years later, the mum-of-two is a Band 7 Clinical Trials Manager in the Department of Eye Research at Manchester Royal Eye Hospital (MREH). She speaks fluent English, manages a portfolio of complex trials, and is Chief Investigator of her own study.

Despite coming such a long way, Monika plays down her career progress. “It sounds great,” she says. “But it’s just been a case of taking things day-to-day, making decisions at the right time, and not being afraid of walking through the doors when they open for you.”

Monika came to the UK to make a better life for her family. The move was an opportunity to eventually get on the housing ladder which, due to the economy, was an unrealistic prospect in her homeland, despite the fact she graduated as a social worker and has a second degree in political science.

In her home town of Szczecinek she worked as a rehabilitation officer with the Polish Blind Association, teaching adults how to live with sight impairment, helping people to carry out household tasks and teaching braille.

However, once Monika came to this country and settled in Crewe, her qualifications were not transferable and, without the ability to speak English, she was unable to utilise any of her professional skills.

After her three days as a supermarket cleaner, Monika got a temporary job working in a lingerie firm warehouse. She says: “I prepared questions by writing on pieces of paper to ask: ‘what do you want me to do?’ ‘When is my break? Where is the toilet?’ Even though I had no idea how I would understand their answer.”

Despite the language difficulties, she earned a permanent contract after three months and worked there for three years; progressing to work on invoicing before being made redundant following the warehouse’s relocation to London.

It was then, in 2008, that Monika’s career with the NHS began. She first worked at Leighton Hospital, Crewe, as a bank nurse before becoming a Band 2 healthcare assistant on the surgical ward.

However, it was during her next role as an optometric technician at the Crewe hospital’s eye care centre that Monika’s biggest career-changing moment came. As part of her training, she spent a couple of weeks at Manchester Royal Eye Hospital and heard about a vacancy for a Band 5 research photographer.

She says: “I have a tendency to be in the right place at the right time. If I never came to the Trust for that two-week course, I would have never learned of the opening and I probably wouldn’t be here now.”

Monika applied and successfully interviewed for the position, in which she became responsible for the imaging on clinical trials.

We’ve had some really good outcomes as a department and that’s because the whole team is very driven, but I think I’m the most competitive! I always want to achieve.

From there, Monika’s willingness to develop saw her take on more clinical tasks such as inserting drops, taking blood samples, and measuring Intraocular pressure (IOP). The expansion of her role led to a promotion to Band 6.

As Monika became more experienced, she was appointed to an opening combining her role as research photographer with that of a research coordinator. This was another learning curve which saw her liaise with sponsors, the R&D department and consultants for the first time.

Having proven her capability, Monika was soon asked to step-up as Band 7 Clinical Trials Manager for one year to cover a secondment. But after more hard work and training opportunities, the role was eventually made permanent and, three years later, Monika is now firmly established in the position.

She says: “We’ve had some really good outcomes as a department and that’s because the whole team is very driven, but I think I’m the most competitive! I always want to achieve.”

“I don’t see it [her journey] as anything special. I think I’m lucky because I have been in the right place at the right time. I’m not afraid to try new things and, up until now, that’s worked well for me.”

What’s more, Monika is now Chief Investigator (CI) for her own study titled: “Motivations and barriers to participating in ophthalmology research projects.”

The project, part of the NIHR Clinical Research Network portfolio, is something she had in mind for a long time. It already has more than 100 adult recruits from MREH, though Monika would love to expand it trust-wide one day.

She says: “By doing this study I’m hoping we’ll be able to develop new recruitment strategies and address these barriers that people tell us about. It might have my name in it, but my senior team are all co-investigators and it’s a very collaborative piece of work.”

Outside of research Monika enjoys boxing. It’s a hobby she took up two years ago after raising hundreds of pounds as part of a charity event for Cancer Research UK.

Aside from helping her unwind and keep fit, it also helps with her work.

“My biggest insecurity is my pronunciation,” says Monika. “People see me as a confident person, but if I go to big meetings and give a presentation, my biggest concerns are my accent and that my grammar isn’t going to be correct. But somehow going to boxing gives me the confidence to bypass these insecurities and that’s something I carry into my job.”