A Wythenshawe Hospital doctor has won a prestigious national prize, in recognition for his work in heart research.

This prize was established by the British Cardiovascular Society to recognise excellence among young researchers intending to pursue a career in cardiovascular clinical medicine or research.

People who have Fabry disease do not have the proteins that break down a specific fat. This fat collects in the heart and raises the risk of heart rhythm problems, heart muscle thickening, heart attacks and stroke. 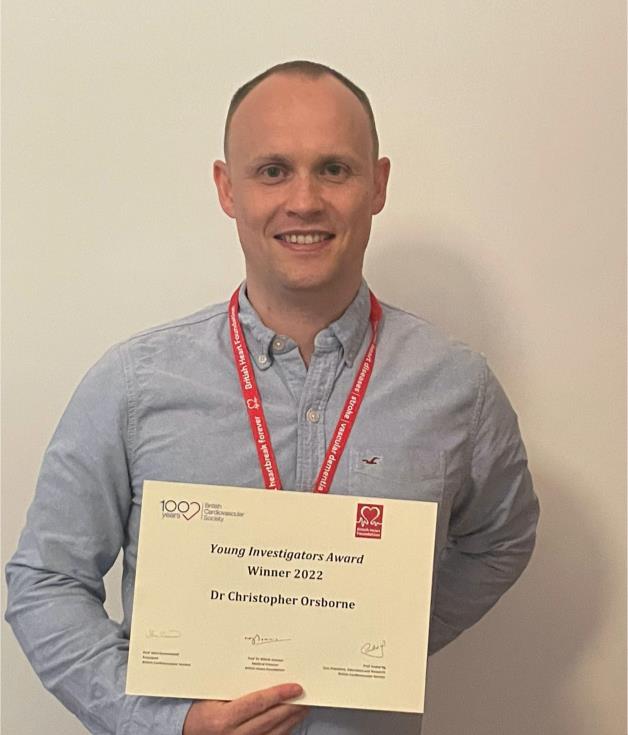 Dr Orsborne with his award certificate

Dr Orsborne said: “It is a privilege to be part of the research team working at the British Heart Foundation Manchester Centre for Magnetic Resonance Research, at MFT, under the supervision of Professor Chris Miller.

I’m absolutely delighted that I have received this award and to be recognised by the British Cardiovascular Society for this work.

“The negative effects of Fabry disease on the heart are the leading cause of death for this condition – yet our ability to predict which patients will develop cardiac complications is challenging.

“Cardiovascular magnetic resonance imaging (CMR) provides detailed characterisation of the heart and is increasingly utilised in Fabry disease, but the predictive value of the measurements it provides are unclear.

“We recruited 200 patients with Fabry disease undergoing clinical CMR and followed them up for four and a half years. We developed and validated a risk prediction calculator that accurately predicts a five-year risk of adverse cardiac outcome, such as heart attack, which could easily be integrated into clinical practice.”

Professor Miller, who is also Honorary Consultant Cardiologist at MFT, said: “This is fantastic recognition of Chris’s research by the British Cardiovascular Society.

“The research represents an outstanding team effort over many years at MFT, and across Greater Manchester.

At MFT, we are proud and keen to support clinical researchers to develop in their careers. The team and I are delighted for Chris and look forward to Chris attaining future successes in cardiovascular research.