In 2004 the MRI’s haemodialysis team developed an innovative approach to allow patients to use haemodialysis at home instead of going into hospital.

Led by Dr Sandip Mitra and Sister Gill Dutton, the programme has helped make substantial savings, with dialysis costing up to £28,000 per patient annually in hospital treatment, with a 40% savings for the equivalent treatment at home.

The programme soon became the largest of its kind in Europe, open to all patients in the Manchester undergoing treatment for kidney failure. Significantly improving their quality of life, patients undergoing haemodialysis at home typically require less medication and have greater treatment flexibility with often much better clinical outcomes.

Initially one of the main barriers to offering such a service was a cultural one as patients were not used to treating themselves. To tackle this problem the Trust created a dedicated centre and a curriculum of patient training and empowerment to enable self-management and better outcomes. 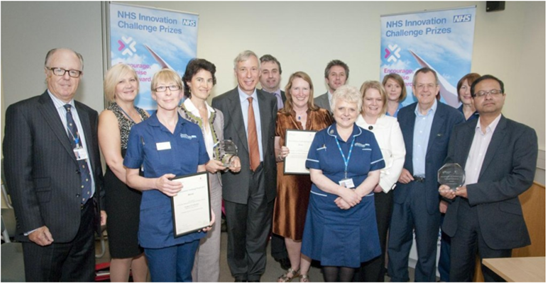 By providing patients with  the tools and know-how required to make the transition to home haemodialysis, it allows more flexibility, with longer or more frequent sessions, enabling patients to fit dialysis around their lives and also maintain jobs and productivity. Many patients opt to undergo the treatment whilst asleep between three to five nights a week, which is less restrictive and more convenient. This has resulted in better outcomes, no restriction with diet and fluids and a significant improvement in patient wellbeing.

Since the introduction of home haemodialysis, 432 patients have been trained in the programme to be independent on haemodialysis, with increasing numbers joining every day.

The programme has sparked an interest in the treatment modality in the UK, and hosted visits by teams from several UK centres who have subsequently set up the pathway with success. A Home Therapies conference held for the first time in UK in 2007, has acted as a platform for disseminating best practice in dialysis since then. The Manchester Dialysis meeting is oversubscribed each year and is now a key event in UK Renal meetings calendar. The Manchester team has been recognised by national and international community as a global centre of excellence in home haemodialysis.

The project has continued to innovate to create a model of empowerment for all patients commencing dialysis through enabling technology. The programme has gone on to win many national prizes, including the top prize in the 2011 Department of Health’s Innovation Challenge and the NICE Shared Learning Award, which recognises high impact inventive solutions to challenging issues in healthcare today. The innovative programme provides a solution from all perspectives – patients, healthcare providers, and the wider society.