A 70-year-old woman, forced to live with cough since her 40s, is ‘excited’ to be the first person in the world to receive a potential new cough treatment at the NIHR Manchester Clinical Research Facility (CRF).

The global research lead for the study, Professor Jacky Smith, Consultant at Wythenshawe Hospital, part of Manchester University NHS Foundation Trust (MFT), and Professor of Respiratory Medicine at The University of Manchester, has played an integral role in the worldwide search for a treatment of chronic cough (a cough lasting eight or more weeks).

Coughing is a way in which our bodies get rid of foreign particles, irritants, microbes, mucus and bacteria – among other allergens from the throat – and is an important defence mechanism. Sensory nerves in the airways play a role in generating the body’s cough response and are activated in response to cough stimuli.

Research participant Joan second left, with some members of the cough study team at Manchester CRF at Wythenshawe Hospital

Dr Paul Marsden is the study lead at NIHR Manchester CRF. He, and the other researchers involved in this clinical trial, sponsored by Nocion Therapeutics, believe that when inhaled, using a nebuliser, the study drug, NOC-100, might be able to reduce cough by directly targeting and reducing the activation of the sensory nerves in airways. 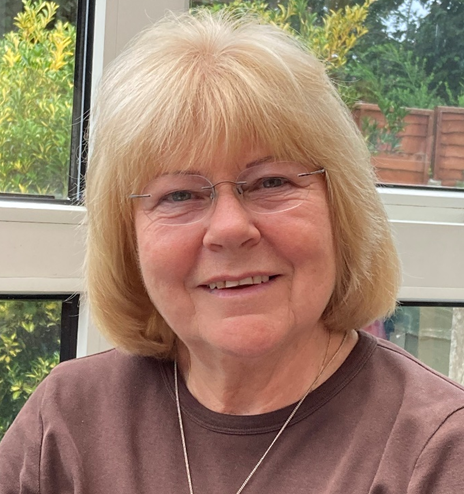 Joan, from Stockport, who is the first global participant in the study, said: “I am taking part in this research for mainly selfish reasons – I want a cure for my persistent cough!

I’ve lived with my cough for 30 years, and in that time, I’ve had people show concern for me, offering various forms of help, from cough sweets to hot herbal drinks. However, I’ve also been asked to leave shops, move seats on public transport, or sit outside at restaurants and bars.

“Even when people try to be kind it can be really humiliating. On one occasion I was in a nice restaurant and I couldn’t stop coughing. A waiter rushed to my aid mistakenly thinking I was choking on some food and used the Heimlich Manoeuvre on me. Unfortunately, as I didn’t have a blockage in my throat, I was violently sick in front of the whole restaurant. I was so embarrassed I had to leave.

“I can laugh about that incident now and I know this research might not help me directly, but many people with a cough are so embarrassed by it – they limit where they go and what they do in public places – and this is such an unhappy situation to be in. We need to find a cure.” 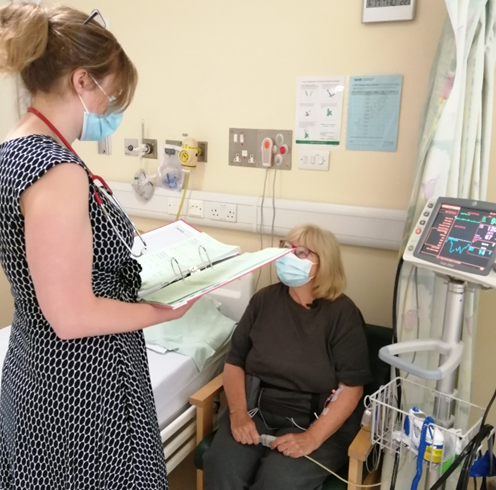 Dr Jenny King, Clinical Research Fellow, sub investigator on the study, checking on Joan after she’s received a dose of the study drug

Professor Smith, who is Director of Manchester CRF and Programme Lead for Improving Respiratory Symptoms within the NIHR Manchester Biomedical Research Centre (BRC), said: “Long-term chronic cough can have a huge impact on someone’s life. It is more than just an annoyance. It can cause a list of unwelcome effects, including anxiety, depression and exhaustion.”

“I’ve spent my career seeing patients in my specialist clinic for the investigation and treatment of chronic cough, and conducting clinical research aimed at finding therapies for those patients whose cough is resistant to treatment.

“If proven to be safe and effective, NOC-100 has the potential to have a beneficial impact on the lives of people with this distressing condition.”

The study is being carried out in the United Kingdom and Germany.

“Cough is a common and debilitating symptom that affects millions of people with few available treatment options. We believe NOC-100 may have broad potential in the treatment of cough, including chronic cough.

“As we evolve to this next stage of development, we are extremely pleased to be working with premier research centres like the NIHR Manchester Clinical Research Facility, under the direction of global cough experts such as Professor Jacky Smith and Dr Paul Marsden, and their experienced clinical research team.”